Soldering is the backbone of electronics, connections are made using molten metal. Obtaining a soldering station for electronics use can be done rather cheaply. Even cheap soldering stations can be enough for most applications. However, once you come upon larger ground plains,(larger areas of metal) or larger devices, such as bnc connectors, it can take awhile to heat the components up to the melting point of solder. For quite awhile though, I was under the impression that my cheap station was pretty much good enough for almost anything. But after owning a JBC iron, I can say that it is really nice to have something high quality, especially for the more demanding soldering tasks.

But how did I come to the decision to make a soldering station controller in the first place? Well, there’s a YouTuber by the name Marco Reps. I find both the projects and content he covers pretty interesting, as well as his filming style. A friend who also watches his channel suggested that we try and build a soldering station project that he built, and released the source code, as well as a schematic for. Having a look at it the first time, it was a bit above my head, but I thought “what’s the worst thing that could happen, it doesn’t work?” While that’s ignoring the dangers of working with mains AC voltages, and transformers, that is also a factor.

In any case, despite being a bit out of my depth, I decided to bit by bit work on the task. The first issue is that the schematic was supplied as an eagle file, as well as a PDF. When I first started out with electronic board design software, I started with eagle, and made a couple of designs. However, a friend turned me on to Kicad, and I’ve been using it ever since. I decided it would be easiest to download some plugins for Kicad, and use some third party tools to convert the schematic into a usable form for Kicad. This ended up being successful, but I found the conversion confusing compared to what I was used to with Kicad, so I ended up slowly redoing the schematic anyway. 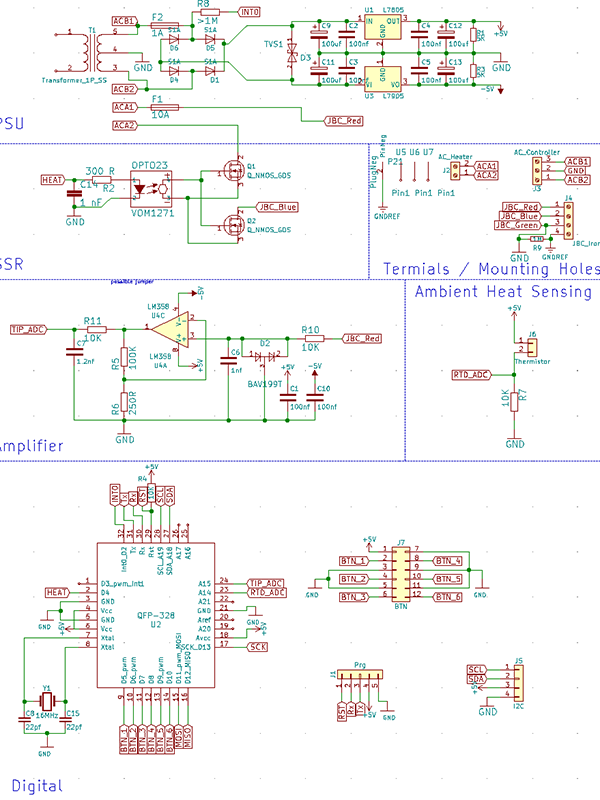 After everything was sorted out, and we began to try and understand how everything worked, and what was involved, a board design was done, and the files were sent off to a board house to be made. When we got the boards a couple of weeks later, they were assembled, but there were issues. It took at least a week of troubleshooting to figure out what was wrong (problems with the design of the positive and negative supply for the logic and op-amp) When it was figured out, further testing was done, and a corrected board was commissioned. The second board arrived, and presto, it worked! How satisfying. After working with the two revisions for some time, and tweaking the code, a much better understanding of the operation of the controller was acquired. 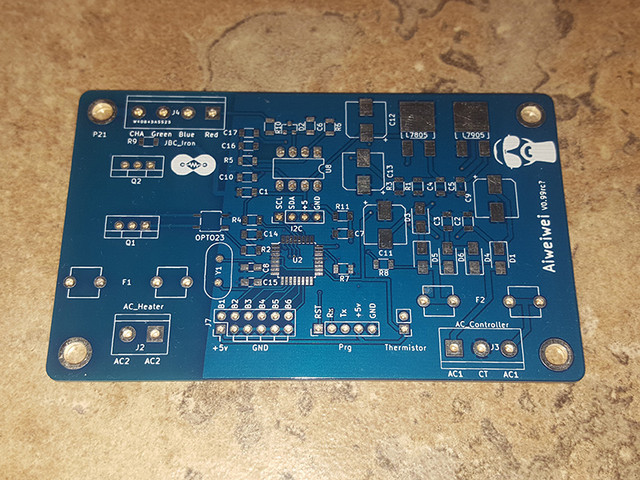 The controller actually worked quite well. I paired it with an audio amplifier transformer I got out of a stereo I salvaged from the curb, probably somewhere in the neighborhood of 120 watts. This controller, requires separate isolated AC power, power for the logic, and power for the heater. The audio transformer had several windings to choose from. I powered the heater with a 40v winding, and the logic with a winding somewhere in the neighborhood of 12v. To achieve a positive and negative supply, a center tapped winding was called for, but with some tweaking of the capacitor values, a half wave supply for both the positive and negative was all that was needed, enabling easier transformer selections, and in this case enabling the use of a single transformer; quite a nice feature in my mind. Performance using a larger cartridge was tested. Getting up to temperature was extremely quick, and thermal regulation is also quite good. One nice thing about designing a station like this is you have the freedom to use the transformer of your choice. The estimated 120w transformer I chose seems to be overkill, but it’s nice knowing you have all the power you’ll ever need, for probably the best iron on the market, all running on your hardware and your modified firmware. You’re able to tweak and code for anything you’d like. The joys of custom electronics! 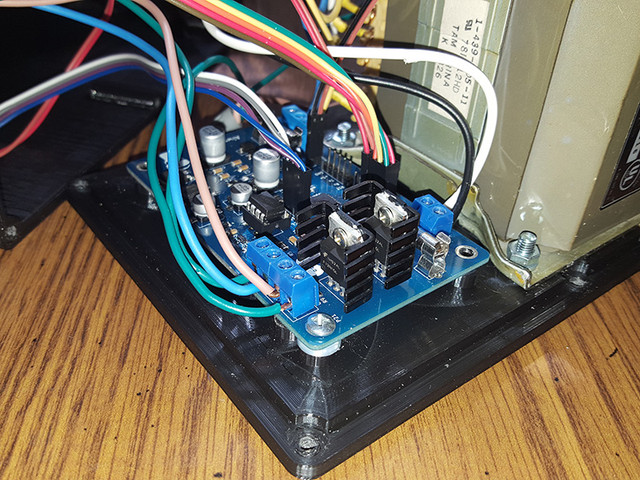 The JBC iron cost over $100 new, for just the iron. The JBC stations go for hundreds themselves. So despite the project costing a bit, the end result is quite a bit less expensive than a new setup from JBC. The final issue that I ran into was a housing for the station. One option for a housing would be to re-purpose an existing electronics housing, ideally from some obsolete gear. Finding it pretty difficult to find a housing, I decided to design and print one using my 3D printer. It turned out fairly well. Although not optimal, as it’s constructed of plastic, it was designed to house the hardware, which you won’t find any other way. After completing a project such as this, I was left with many ideas for ways to improve things. Perhaps I will cover some of these in a future article. 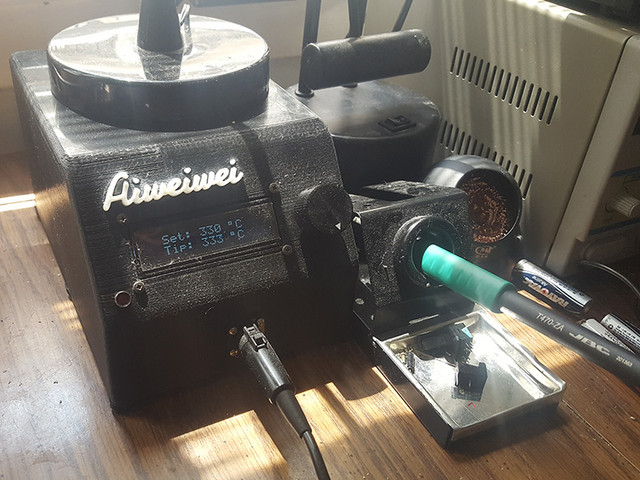 As with previous projects, I’ll link the source code used for the project. The code was compiled with the Arduino IDE, and is partially based on Marco Reps code, especially the heater PID code. Libraries used should be available on github, however different versions may break things, so some tweaking may be required.

The Code is available here

Thanks for stopping by, and good luck!