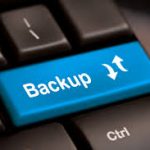 That’s why today’s lesson will be a short note on the ever popular topic that you’re no doubt tired of hearing about: (but also may not adhere to) backing up your stuff!

You may say, right, dummy, everyone knows to back up their stuff, I fell into that camp too, but the category that I didn’t fall into was, keeping track of my backed up stuff. After all, backups that aren’t scheduled to take place automatically, particularly in an environment where there are  not constant updates to back up, seem rather boring, and don’t seem particularly important if they never seem to be used.

Well, things will eventually fail, and when they do it will be a harsh reminder to make sure you keep track of everything.  Because of my lackluster backup policy, I was unable to locate a recent copy of my blog’s database, (found one from 2009) and therefore I’m starting from scratch again. Fortunately, there was almost nothing of importance on the site anymore, and I still have some of the original word documents that the posts were created from, but eh, after a hard drive failure, and the monotonous and annoying setup of a new operating system, the less you have to worry about, the better.

So this post should serve as a reminder, (mainly to me?) that not only should you back up your stuff, but you should also keep track of the backups of your stuff.